Why don’t the best leaders get the top jobs? 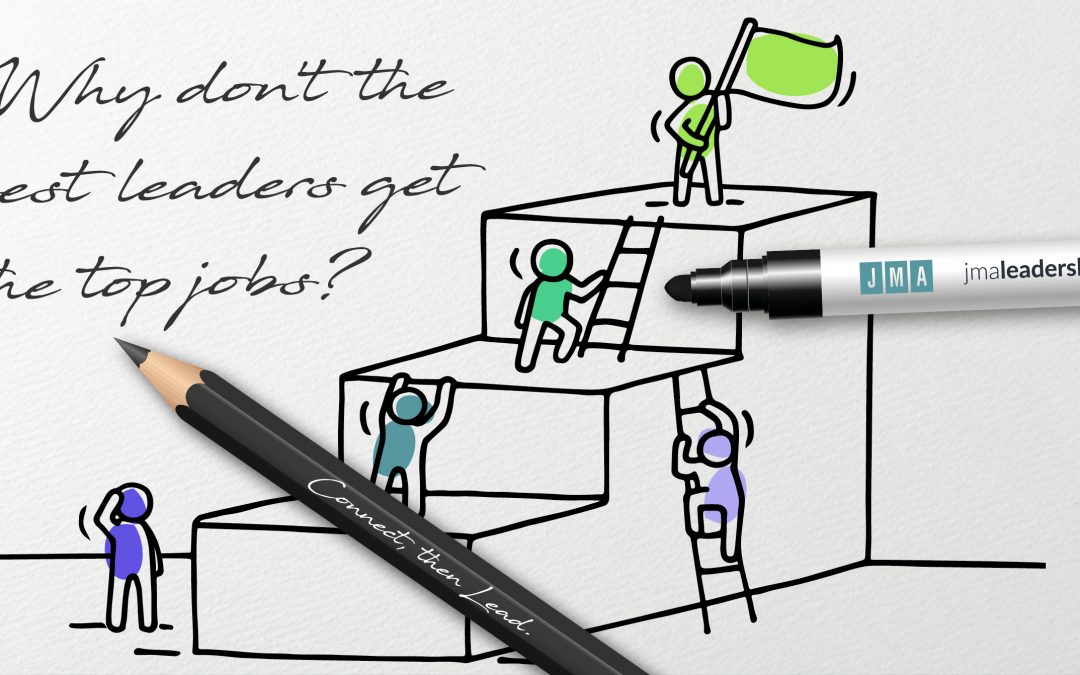 Why is it that those great leaders, the ones who role model the best behaviours, seldom get picked for senior roles in some businesses?

This question came about recently during a conversation with a client about what good leadership looks like; they were thinking about examples in their business, looking up to the top senior roles to see how those who led the organisation stacked up.

If the organisation genuinely believed in its leadership model and promotions were based on displaying the requisite skills and behaviours, why was there not a clear correlation?

Surely, we discussed, it cannot be too simplistic to believe that those demonstrating (repeatedly over time) a consistent track record of exemplary leadership behaviours would succeed in reaching the higher echelons?

Our discussion generated several insights, as to why managers and executives may have got to their positions for reasons other than good leadership skills*

·        Because leadership is about moving people to action and developing other leaders. This can take some time to materialise so it may be a while before great leadership behaviours become noticed – and in a short-term business performance environment that may never happen.

·        Taking the short view often means focusing on easily measurable outcomes and quick fixes, rather than on some of the processes involved in a long-term leadership development strategy.

·        Most leaders at a senior level have considerable autonomy and may only see their boss a few times a month. While the boss quickly hears if there are problems and complaints, the bulk of the leader’s routine work and accomplishments may go completely unnoticed by their direct line manager.

·        In some cases, the line manager may be oblivious of their direct report’s hard work and exemplary leadership behaviours

·        This problem is compounded when work is geographically dispersed and virtual.

·        The organisation (by that we mean the Talent Board approving promotions) does not use their leadership model as the only criteria – and perhaps leadership behaviour is not valued as highly as, or be as influential as, other factors

·        Could the organisation’s leadership model be flawed?

·        Talent Boards don’t exist in a lot of businesses still, so people hire on their own or in pairs which increases the likelihood of unconscious bias and recruiting in their own image

·        People have different views of leadership so even where there is a leadership model in place, the observation and assessment of behaviours it is ultimately a subjective experience

·        The leadership model may not have been in place for long enough for those promoted at a lower level to rise to the top. Those leaders currently in senior roles will therefore not have been selected using the current lens of leadership. Which means that they may not be looking at leadership behaviour as a key criterion within those they see as their successors.

·        ‘Situational bias’ means that people are remembered for the roles that they were in, not for the behaviours they are now displaying, and are therefore passed over for promotion based on out-dated perceptions

·        The skills of observation could be low – not all line managers could not be as good at observing and documenting leadership behaviours as they are at ascertaining performance year-round.

·        Some leaders who role model great leadership behaviours may not have an effective self-promotion strategy.

·        Leadership effectiveness is really hard to measure; and management skills may be more highly prized in the organisation than leadership behaviour

In short, from our discussion there were a whole host of reasons as to why exemplary leaders may not be reaching the most senior roles in organisations.

You may have some more to add to our list.

The truth is that even though some people tick all the boxes for things leaders do well, they just do not get promoted. People work hard for years, put in extra hours, take night school classes, and have a team that loves them. They have done everything their boss has asked of them and more.

While some people may be impatient to progress or may simply have misjudged the extent of their leadership skills, many good leaders do not get the top job with the corner office as often as we’d expect (or hope).

Why bother then, with leadership development?

Leadership matters to people’s commitment to work, their willingness to work hard and take the initiative, and their overall ability to perform above and beyond, which ultimately impacts upon the organisation’s success.

Great leaders bring out the best in individuals and their teams. They inspire trust, help people feel that what they do is important, and create a spirit of community.

What this means is that leadership ability alone does not guarantee success in rising up through the ranks. If great leaders want to rise to the top then they also need to pay attention to other determinants of success, such as networking effectively, organisational culture and understanding unwritten rules.

What does this mean?

The global Covid-19 pandemic has shown to many how ‘adversity reveals character’, how during times of crisis the behaviours of our leaders are laid bare under blazing spotlight.

Referring back to the conversation with our client, they concluded that:

–         Recent events had stress-tested their leaders, some had done well, others had been found wanting

–         Some people in senior leadership roles, whose skills and behaviours had come up short, now needed to be moved aside

–         Room needed to be made for those who has excelled during this time.

If you’re interested in how to develop your leadership skills (or those of your team) AND learn new skills to increase your chances of promotion, book in for a 30min consult via or get in touch with us at info@jmaleadership.com, or call us on + 44 1604 340990.

*Potential reasons (in addition to, or aside from) great leadership behaviours as to why people get promoted to a senior level in organisations:

·        Proven track record of high performance / delivery (e.g.: consistently bringing in new business), working in a ‘hot’ or at least ‘warm’ area of the company.

·        Ability to play the long game of organisational politics

·        Ability to manage their reputation and ‘leadership brand’

This list is mainly about being promoted internally; this is not to forget that many people move into senior leadership positions by being hired externally.