Leadership Lessons from a Jedi Master 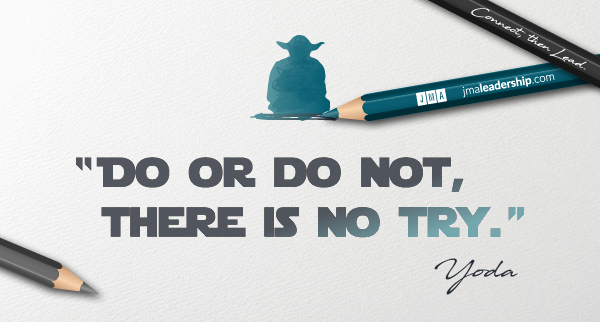 It’s rare to find someone who hasn’t ever watched a Star Wars film*. I was facilitating a coaching skills workshops recently when the oft-quoted phrase from the Jedi Master known as ‘Yoda’ came up:

One of the participants had said that they would ‘try’ and implement a new learning, a new insight, that they’d just had – and “Do. Or do not. There is no try” was the response they got from one of their colleagues in the room.

Laughter ensued and the first person corrected themselves, saying that that they would ‘do’ what they said they were going to ‘try.’

This exchange got me thinking about the concept of ‘try’.

On the one hand, as a professional leadership coach, I sometimes feel that I hear it too often.

“I’ll try and do it. I’ll try and get those things done between now and our next coaching session.”

This statement acts as a red flag to my listening; it sparks my curiosity.

I find it to be a good opportunity to pause and investigate what’s going on for, and with, my coaching client.

Why do I feel that I hear it too often? Because using the word ‘try’ can be an indication that there are inner reservations or doubts that a client is experiencing. My focus is on enabling my clients to achieve their goals and if there’s ‘stuff’ that’s getting in the way, then this needs paying attention to.

It requires further exploration and examination, a look ‘under the hood’ if you will.

In 2008, The Leadership Challenge conducted a survey among their current LPI** certified master coaches looking at the biggest concern they faced. One of the biggest issues was ‘leaders not following through on their commitments.’

This is no surprise; leaders are now busier than ever. I hear many say that they’ve not taken a holiday in ages without taking their work with them. They never have white space under their emails and their mobile phones are never far away. The last time they had plenty of time for planning and reflection? They usually can’t remember.

So ‘try’ can reflect the busy nature of a client’s life, and on deeper questioning this word typically opens up a candid and frank discussion about whether or not they have the capacity to have that 121 conversation they know that they need to have; or go to that networking event they know attending will benefit them.

Reflecting back the word ‘try’ in this way helps re-connect leaders to the bigger picture of what they want to achieve, what they started their coaching programme for. It helps them consider whether they’re spending time on day-to-day work issues rather than focussing on their key goals.

I once came across a saying: “Replace the word ‘try’ with ‘will’ and watch the magic happen.” It’s a nice idea and does work for some. Give it a go and see whether it increases the likelihood of you taking action.

However, the emergence of the word ‘try’ can be a sign of other underlying issues, such as: –

On the surface, a client using the word ‘try’ may seem like they are expressing a commitment to taking action yet as a coach you may discover at the next session that they have not. Or maybe they have.

The main thing is not to assume what the word ‘try’ means, without probing deeper.

Because, as John F. Kennedy said, “Every accomplishment starts with the decision to try.”

Let me quote the words of a recently released song***, which resonates here:

“I don’t know if I can make it

I don’t know if I can make it

Some leaders who have very good intentions need to ‘try.’

‘Learning from trying’ is often what we as coaches spend a lot of time helping people do.

Just like the word ‘snow’ can mean either ‘cold wet stuff’ or ‘the latin word for mountain’, so can the word ‘try’ mean different things to different people depending on their point of view.

What’s your point of view?

As a manager or as a leader, when you hear your employees or colleagues saying ‘try’ what does this evoke in you? Do you think it’s really a ‘no’? That they will not do what they say they’re going to? Or do you think that they will?

As a leader (and as a coach) understanding that words have different meaning to different people because no two people have the same experience is crucial to good communication and relationship building.

When do you find yourself using the word ‘try’? Why is that?

If you want to find out what ‘trying’ means to you and want to fast-track your leadership development plan (or develop your team) get in touch with us at info@jmaleadership.com or + 44 01604 607738.